A-political exhibition attempts to interrogate the conditions of appearance and representation of the “political” subject in art.
Art is often divided into categories, divided with the idea to build a clear system in which each practice is in the right place. The category of “political art”, has never ceased to develop becoming today one of the most widely used languages, perhaps as a sign of the difficulties of contemporary society. We discover it in exhibitions and biennials, waving as a flag, to fight and to clash against principles or situations, perhaps, however this politicization of art, these works so avowedly “against”, have obtained an opposite effect, we becoming anesthetized, they do not affect us more than the images we see on television or on the Internet every day, every time. The risk is to become hostages of our good conscience, our adherence to a noble mission that sometimes is the only way to legitimize poor, needy artistic practices.

With the increase of these proposals so direct and provocative, we wonder if there is another path, another way to address the problems of the contemporary society. It is possible to be effective without being direct? Is it possible to do “political art” by using a “different” image?

In a-political exhibition, we’re not trying to show an a-political art, but rather to reinstate some spaces where political entity is present, however hidden, waiting to be discovered. In all the selected works there is a critical level and a desire to make visible some issues of our society, through an “other” image, less direct. The artists have preferred the camouflage technique and, without shouting or pointing the finger, they try to make visible and draw up a framework through which to observe reality, sometimes making acts that may even seem devoid of meaning - like pushing a neon cart on the streets of New York, or writing with dust on the pedestrian crossings, or silently coloring in white some billboards.
Without trying to define a precise art category, it is interesting to note that this works often deal with the misappropriation of a space, not just a real one, but also the space of world representation as the mass media.

A-political exhibition tells about places, management of spaces, as in every moment people trying to organize their own space and disseminate their ideas.
The exhibition questioned the terms and conditions with which an event, a fact, a concept are represented, with the idea that their “frames” and the vehicles of transmission of these images make them political or not. More than political content tied to art, the issue is probably of that distance from which you choose to observe and show objects and events, distance that you can maintain or otherwise betray, break.

Following this idea we could perhaps speak of “a-political distance”, which, once achieved, slowly dissolves the political subject in a set of additional solicitations, as is the case for example of the Erik Berglin and John Skoog’s video where the eye is lost in the immensity of a urban landscape and the real subject of the work is offered only to a careful audience 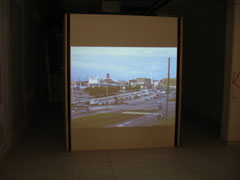 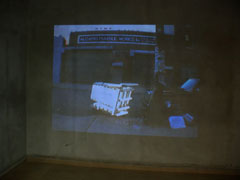 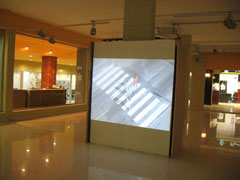