from “The Elephant Vanishes” by Haruki Murakami 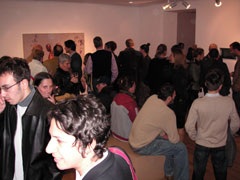 However obscure and provoking the words of Murakami’s character might sound, there is a perennial truth in them: the way meaning is created is not through a simple conveying of “the reality of things” but rather through our accounting of it. Everything, anything that happens doesn’t have a meaning in and for itself - meaning is obtained when all that happens is accounted for, is perceived, and is related to. At the same time, this is also what makes the reality non-finite and almost, always a shifting one.

In “With each new dawn it’s not the same world as the day before” the invited artists offer us a possibility to immerse in the intrinsic process of “reality making”. Through the moving subjects and the play with light in the photos of Bevis Fusha, the unusual architectonic relations of objects and houses in Heldi Pema’s imagery, the personal quest of Elsa Martini, the existential light in Leonard Qylafi’s photographs, the uncanny paintings of Enkelejd Zonja, the silent cry of Era Tula’s installations, and the poetic stance in the videos of Genti Gjikopulli, the artists give life to a vibrating exhibition bringing forth poetic and meditative aspects of our surrounding reality.

The event was made possible through the generous support of: ADMIRAL – Novomatic Group of Companies. The Contemporary Art Award “ARDHJE” is realized in collaboration with the Foundation for Civil Society, New York, the Academy of Fine Arts, and the ZETA Gallery, Tirana. “ARDHJE” has also the support of the Austrian Embassy in Tirana, the Italian Institute of Culture, the Embassy of Sweden in Tirana, and Moving Culture.

On November 14, 2008, during the opening of the second edition of the ”ARDHJE” Award for Contemporary Art, the international jury awarded Leonard Qylafi as winner of this year’s prize, with following motivation:

”His photos are able to reveal the complex structures of places and emotions by using a limited number of elements. Rich and at the same time very simple, the images of Leonard Qylafi are evocative and touching. The intimacy of the individual memory becomes universal through the use of light and the his curious gaze upon life.
This charachteristics are a quality that ensures us that Leonard is the right candidate to use at best the residency in New York City

Photos from the Exhibition: