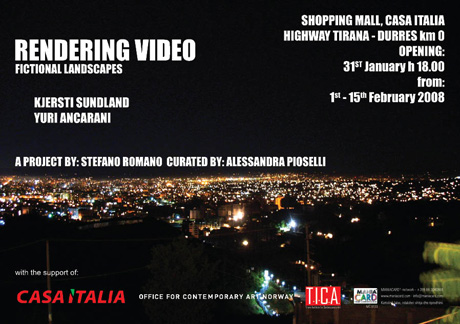 Rendering Video…
The development of the “low cost” technology has allowed the diffusion of the video in the world. In few years the video has become one of the most diffused media of the journalistic production and of the art world.
Internet has given a further push to this media giving the possibility to send the files all over the world and to share them immediately, thanks to the file sharing technologies, putting the video in the center of the discussion on the “democratization” of the news and the images.
In today art world, artists used the video as one of the possible media of expression realizing “low cost” works up to real cinematographic productions.
What is the real value of this media in the understanding of the today society? How it’s perceived by the artists that use it?
Rendering Video… wants to open some questions looking through the video productions of different artists coming from different Countries. 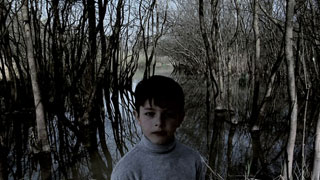 Baal is a trip inside a pine forest. A child is walking through the trees in the dark. The rhythm and the narrative mode of the video seems refer to the police stories and the visions of the sci fiction. The silhouette of a chimney appears through the leaves, tall symbol of a modernity full of doubts and relicts of an époque that held in trust to the technology hope of ransom and progress. The light so dramatic give to the scene a symbolic and mythical dimension, transforming the chimney in an arcane and far object, solitary ruler of a wild and dark landscape. It’s Baal: for the Phoenician the Lord, the divinity, the energy.
The narrating voice is taken from a 1957 Italian documentary on the Ravenna’s petrochemical pole, the zone where the artist shot the video. It announce with exalted tones the victory of the light on the darkness.
In his video work, Yuri Ancarani explores the relationship between the artificial and natural landscape, often shooting the area where He lives, the Emilia Romagna, in a constant balance through countryside and post-industrial atmospheres.

The video came by sampling images from the tube and the zoo of Berlin. Rare figures of careless humans and animals passes through claustrophobics rooms and. The noises on the background contribute to strengthen the feeling of confusion, improved by the loop that take away them thickness as though they live behind an opaque glass.
Hollow void shows a co penetration of time-space dimensions. To the cultural space overlap the animal space, but both are ambiguous, faded. The borders are nullify in a virtual and dream dimension characterized from the dilation of time and space. In the video the space is manipulated as the time, not only sampling shooting made in two different locations, but also projecting the video in a dual channel mode transforming the image, apparently unique, in two ones scrolling in synchronous, obtain an unnatural horizontal scenic.
Kjersti Sundland use the digital technology in a sophisticated way to expand the borders of perception.