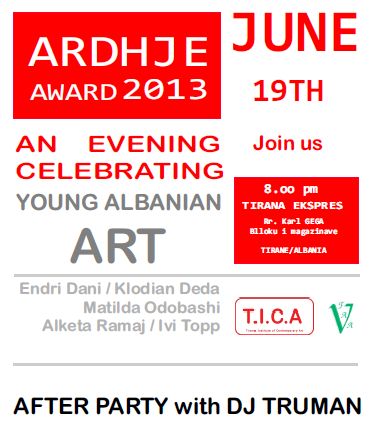 ENDRI DANI (born in 1987 in Shkodra, Albania) lives and works as artist and graphic designer in Tirana. His works has been shown in a number of independent and institutional exhibition spaces throughout Albania and was most recently featured in Jerusalem, Israel, in the context of Israel Yang Biennial (2012). Departing with a background in painting, his work stretches over a number of different mediums and is often informed by found objects, artifacts of ordinary life, cultural history and “premature” archeological findings of his home country. He is also co-founder of MIZA gallery, an artist-run gallery in Tirana dedicated to the work of emerging Albanian artists, that also hosted the premiere of Marina Abramovic's The Artist is present.

For this year ARDHJE AWARD 2013, the artist will focus on a recent project series entitled PALIMPSESTS, that up to date includes 6 pieces. PALIMPSESTS reflect above all the artists’ ongoing research into the material remains of recent history: objects that appear out of use or that have been subjected to radical replacement and adaptations, both in form and meaning. Utilizing a process of re- and overwriting, PALIMPSESTS is an attempt to both travel in the past and in the future, an ongoing digging and scratching on the surface, until something more meaningful comes to the fore. The result is a very delicate, multilayered, and times very personal provocation of the present and the status quo within the past, for which the artist takes techniques such as writing, distilling, collecting and ornamenting to yet another level.

KLODIAN DEDA (born in 1984 in Puke, Albania) studied at the Academy of Fine Arts Brera in Milan. In 2008, he was invited to the Art Kontakt Festival in Saranda, followed by presentations of his work at Art Kontakt Kavajë (2009), Art Kontakt Porto Palermo, Himara (2012). In 2009, he took part in the project Krossing at the 53rd Venice Biennial. Amongst other, his work was on display at Caelum Gallery, New York (2012), and Galeria San Lorenzo, Milano (2009), as well as in joint competition-exhibits such as Internazionale Arte ITALIA 2010, Turin, Sotiri 2011, Korca, and Riciclati 2011, Padova. Klodian Deda lives and works in Milan.

In the course of the last years, Deda has worked with increasing frequency outside of the white cube, addressing public space, abandoned architecture and most recently: nature. To Deda, there is no “unpeopled” or inhabited environment. Instead, the artist is keen trace the visible and invisible remains of human activity by creating grotesque scenarios ‒ a housing facade adorned by a huge bra (XXXL, 2011), a pile of chairs seemingly climbing over an antique gateway (Nomadismo, 2008). Not rarely, the architectural and sculptural matter of his work undergoes an anthropomorphic transformation, pregnant of information about human existence by becoming human themselves. For the ARDHJE AWARD 2013, the artist will present a selection of work that take the idea of recycling as a starting point for an investigation into “human waste” ‒ both in a good and bad sense. The problem of pollution here becomes a problem of the human being at large, nature's most violent decoration.


MATILDA ODOBASHI (born in 1988 in Tirana, Albania), lives and works in Tirana. Matilda Odobashi graduated in 2010 at the Academy of Art in Tirana, where she since holds a position as Assistant Professor. Originally educated as a painter, her practice also encompasses drawing and photography, with a growing interest in site-specific installation and spatial interventions.

Nominated for the ARDHJE AWARD 2013, the artist will offer a revision of her long occupation with the relationship between the human and space. Her series of paintings (The buidling No1; The buidling No2; The path) provoke a sombre coexistence of intimacy and malaise. Depicting human standstills and free-falls in cryptic spatial environments, the works verge on abstraction, whilst exposing a variety of narratives and possible continuations of the “story”. Following a strategy of simplicity and reduction, the photographic series Life inside a bus acts like a double-portrait of the landscape and the passengers of a local bus, in which the notions of inner and outer get compellingly diffuse. Odobashi's presentation will be framed by a new, site-specific work: The Giant (2013) ‒ initially developed in the context of “Udha” (Metropol Theatre Tirana, 2012) ‒ that toys with scale and audience participation, inviting to a “vertiginous” expedition.


ALKETA RAMAJ (born in 1983 in Permet, Albania) lives and work between Tirana and Venice, where she is studying at Academy of fine Arts since 2012. Graduating in 2006 at the Academy of Arts in Tirana (class of Edi Hila) she was the winner of the 2012 Onufri Award. Her work has been widely exhibited in Albania and abroad, such as at La Fenice Gallery, Venice (2012); the National Gallery of Tirana; What Happened to the General?, FAP Gallery, Tirana; Mulliqi Prize, National Gallery, Prishtina; Feedback 1989, Dajti Hotel, Tirana (2009); Constructing Space, Deutsche Welle, Berlin (2008); Tirana-Transfer, Badischer Kunstverein, Karlsruhe(2006); 3rd Tirana Biennial, in collaboration with Andreja Kuluncic (2005). Shortlisted a few times for the ARDHJE AWARD, she is currently artist-in residence in Vienna at KulturKontakt Austria, and was former ARDHJE AWARD artist-in-residence at T.I.C.A. in 2011.

Her position as an artist is exemplary for an incessant curiosity and permanent study of new forms of expression, which reveals a striking “independence” in terms of applying her own critical and ambitious working methods. In the past years, the artist has explored a number of different mediums, from photography to video, painting and lately sculpture. For this edition of the ARDHJE AWARD, she presents for the public the recent video project Untitled. Reflecting on the relationship of a couple and on what might at first glance appear like a “monotonous cycle” of it, the artist uses a poetic approach, eager to fathom this “monotonous relationship” as an interior conflict of insecurity and silent domination, disclosing of a form of “intimacy” that is not restrained to the surface of the protagonists' skin.


IVI TOPP is an Albanian artist who lives and works in Toulouse, France. His work has previously been exhibited at Art Kontakt Festival. Porto Palermo, Albania (2012); or most recently in the context of Traverse Video, Toulouse (2013) and Jour slash Nuit, Toulouse (2013).

With the installation ETERNAL FLAME, presented for the first time in Albania in the context of these years ARDHJE AWARD 2013, Topp offers to the viewer an exploration into “random chance”. In nearly complete darkness, a glass pyramid provides the only source of light and sound – in the centre of it a flickering light, water splashing, discrete vibrations. Unlike recreating a comforting campfire situation, Topp allows for a cutting-edge experiment with chance and science, generating a radioactive, electrified flame that makes “visible forces that are otherwise invisible”. The pyramid turns into a minimalistic multidimensional totem – once activated it has a life of its own. In this sense, the “ingredients” to his work already provide for its first layer of interpretation: Uranium glass, UV Leds, Wood, aluminium, plastic, plexiglass, geiger tube, electric wires, custom electronic circuits, switches, custom software, modified flashlight, sound system, video projector.