For Those Who Can Not Enter 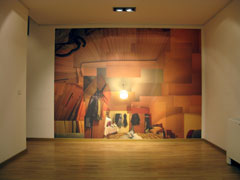 Annaleen Louwes has worked in the premises of the Institute of Execution of Penal Verdicts ”Ali Demi”. She shows a series of photos from this research; She tried to focus on the individual being of women, giving them back a certain identity, almost forgetting that they are prisoners. The works are studies of individuals without pointing at their social context, whereas life in prison mirrors somehow Albanian society. She shot photographs every day and brought prints the next day. So the group of women who wanted to come to the little photo-studio she installed in the library, grew day by day. They started to ask her to reproduce the pictures they had of their mother or lost child. She got a very intimate view on their lives in that way. At the same time she became their photographic tool and they made all kind of collages with the picture she had made and they already kept.

Yllka Gjollesha presents a series of photographs, a continuation of her inquiry on ”the skin of the city”, where fragments of everyday reality are the focus of her camera; In her work she is interested in the “hidden life of things”. A wall covered in endless layers of posters, ripped away, a sun ray falling on a person waiting, a graffiti sign informing of a shop, the inside of a passersby bag or the inside of somebody’s pocket – all of them are fine and intimate subjects. The artist tries to discover them, acting like an X-ray scanner, as the ones that can reveal what’s inside our bodies, or the ones that reveal the contents of our bags and pockets in a security check in airports.

Syabhit Shkreli also presents works in photgraphy and video.His artistic practices start by asking himself what are the problems which he is facing at the moment as an individual living in a society, whose dominant feature is that citizens’ rights have not been fully put to use; in other words something other than the law impedes citizens participation in the political life. The response of the individual to the current state of affairs has been Complaint. However, complaint about the present situation is not enough. The artist believes in the mission of art as a powerful tool in increasing awareness of citizen capacities within society, so that the citizen plays an active role in making not just abiding to the rules. The citizen can do something to change the rules and through them change society and is aware of the strength of this power.