TICA has the pleasure to announce the start of the  AIRLAB period for the fall 2016.

The participating artists are:

KOJA (Fitore Isufi) / (b. 1982 in Gjilan, Kosova). Her work is conceptual based, using drawing, painting, video, installation, text installation and performance. Inspiring stories and different interpretations, political maneuvers and cultural speculations, patriarchal mentality and casual gestures, freedom limits and censorship forms - this is what makes her keep notes most of the time, as a reflection of the social, historical, cultural, and political climate, imposed by the country she operates at.
Her work has been shown in various projects, individual and collective exhibitions and presentations, at a local and international level.
Currently she teaches at Akademia Evolucion, in Prishtina, Kosovo, and also she is co-founder of Autostrada Biennale/International Contemporary art Biennale in Kosovo.

Remijon Pronja is a visual artist born in 1984 in Tirana, Albania, where he currently lives and works. After his initial formation at the Artistic Lyceum "Jordan Misja" in Tirana (1999-2003), he moved to Italy. He studied painting at the Brera Academy of Fine Arts in Milan (2003-2011) and received his master degree in interdisciplinary research of contemporary visual art practices, before his ultimate return to Albania in 2011. Together with his colleagues Endri Dani and Olson Lamaj, he is a co-founder of MIZA Galeri [www.mizagaleri.com], an artist-run space in central Tirana devoted (since 2012) to the promotion and support of emerging artists from Albania and abroad through various types of cultural exchange. Since his first public presentation in 2005 at the Gallery Domus in Locarno, Switzerland, Pronja has taken part in numerous international group exhibitions in his home country (Shkodra and Tirana) across Europe (Pavia, Milano, Bari, Stockholm, Sarajevo, Berlin, and Budapest) as well as in Canada (Toronto). Rex anonimous, his only personal show so far, was organized in 2014 at the Ku/RZ/nsthalle in Bregenz, Austria.

Veronika Eberhart is a trans-disciplinary artist based in Vienna.  She studied Sociology & Gender studies at the University of Vienna and at the Academy of Fine Arts with her focus on performance art. She has released numerous records and played many shows internationally and nationally from festivals, punk clubs to galleries with the bands Plaided, Tirana and Lime Crush.
She also wrote the soundtrack for the documentary FtWTF-Female to What the Fuck (2015, Directors: Katharina Lampert and Cordula Thym) and for the movie Talea (2013, Director: Katharina Mückstein).  Her latest performances include participations in plays as A STORY OF O. & I. (Lise Lendais) at Werk X (2016), a collaboration Hinterland with Julischka Stengele for the Straight To Hell-Festival- Vienna‘s First International Queer Performance Festival (2015), a Solo appearance with her piece Drums for Two at VBKÖ- Austrian Association of Women Artists (2015) and another collaboration Birdhouse/Nuthouse with the artist Nicholas Hoffman, within the framework of the Exhibition Destination Wien/Kunsthalle Wien (2015).
The use of media in Veronika Eberhart´s works is distinguished both by its high musicality and the negotiation of conceptual issues with the sensitivity of artistic practices of feminist positions and art history. United in a transdisciplinary approach to video, sound, performance or sculptural sound installation, her practice is based on theoretical and historical research and seeks formal translations from an activist starting point.

They have all received different training and have different backgrounds, which are reflected are in their artistic production, approaches, methodologies and sensibilities.

Donika Cina starts from small personal events, which become the center of her production. Through the use of different media of expression the artist explores her inner world, transforming it into a universe accessible to all.

Driant Zeneli’s research rather focuses on the redefinition of the ideas of failure, utopia and dreams. Zeneli’s videos and performances create atmospheric fairy tales in which the viewer reflects on the possibility of superseding their own limits without assuming the role of a superhero.

The research of Lek M Gjeloshi rather focuses on that subtle and almost imperceptible space between the void and demands of expectation; and he shows that what divides these contrary positions is merely a mental switch that changes our approach to the world from the nothingness of denial to the infinitude of promise. In his installations Gjeloshi seems to hover over this boundary by bringing the viewer into a void filled with expectations.

The world as seen through the eyes of a child and refracted by Albanian realities is the main focus of Matilda Odobashi’s work, which short circuits this view "from below" (by children) by the construction of reality " from above" (made by adults) in simple installations in which the viewer has to experience wonder to only confront the harsh reality of the today's social situation.

TICA thanks all young artists that applied for the selection phase of Ardhje Award, as well as all curators and artists that contributed with nominations during the process. 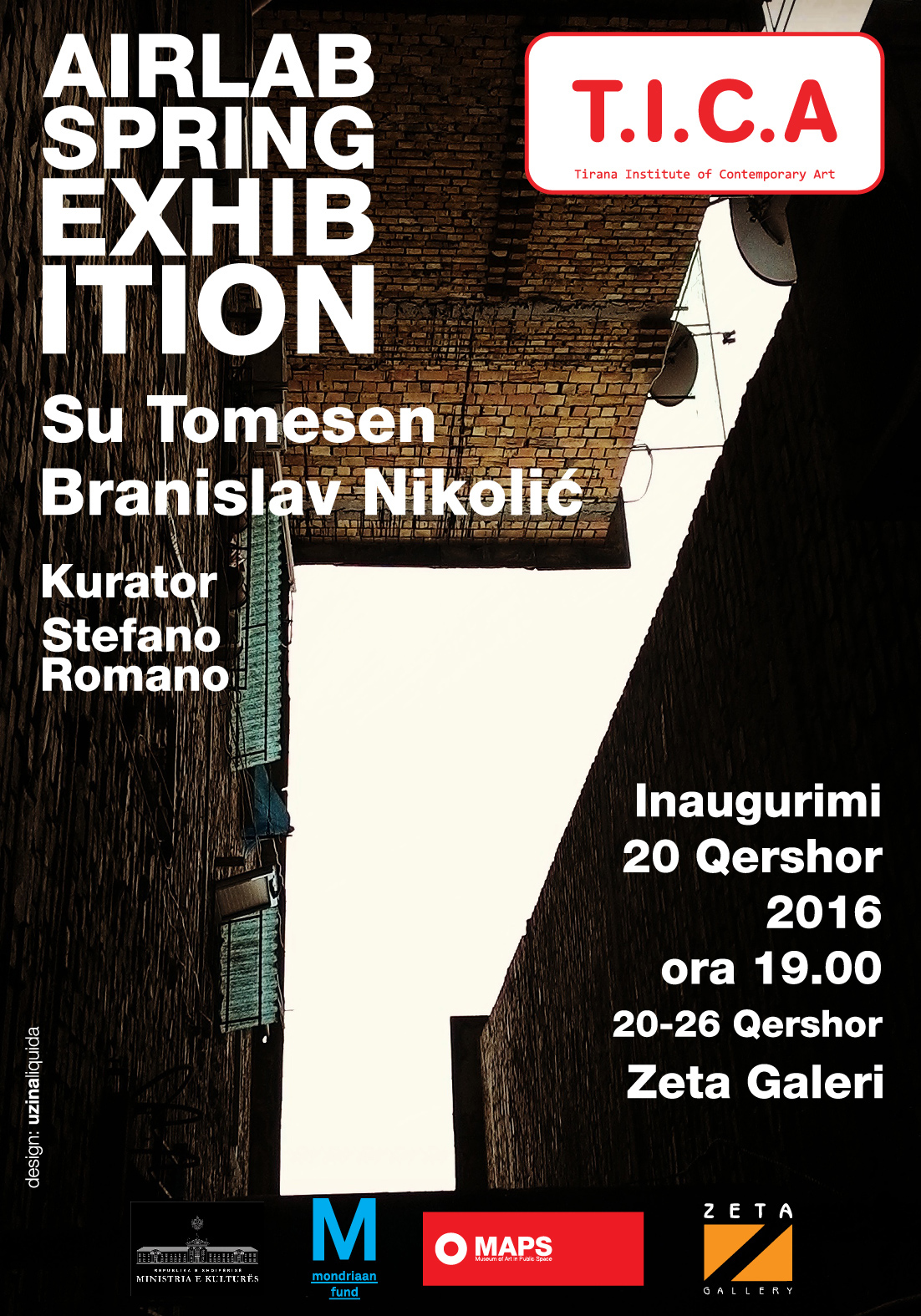 Started in 2006, TICA's residency program is the only regular and continuous program of its kind in Albania, providing a very important platform for exchange, research and production. The main profile for AIRLAB is visual contemporary arts, but since the last three years, the program has been of a multidisciplinary nature, hosting artists from the fields of theater and film besides visual artists.

The spring 2016 edition of AIRLAB features three artists in residence: Silva Agostini, Branislav Nikolić and Su Tomesen. All of them engaged in research of themes and context, relating to the city and multiple layers its history and everyday reality. The processes developed by the artists are still in progress and will be shown in their final form later on during the year. The finalization of their respective residencies is materialized with this exhibition AIRLAB SPRING EXHIBITION, featuring works by Su Tomesen and Branislav Nikolic. Although Nikolic’s work relates more to the historical past of Albania and Tomesen’s deals directly with the everyday reality and the invisible stories, both approaches constitute some kind of diary or log-book from their stay at TICA-AIRLAB.

The focus of Su Tomesen’s research was the informal economy, an integral part of the Albanian economic reality. The final film she is preparing will be screened in September. However, during the shooting of this work the Dutch artist conceived a new work titled AT THE CORNER. During her residency the artist engaged deeply with the road, Rr. Myslym Shyri – a place where she was also located - considered one of the most elegant streets along which you can find many shops selling expensive fabrics, clothes and wedding dresses. Yet, even here there are micro realities of subsistence that highlighted through the magnifying glass developed by Su, become much more present than you might notice when walking along the street. Small, fragmented realities of survival that everyday change and mutate the visual landscape of the road. In her wanderings through the city the artist came across a woman selling flowers at the eastern corner of the perimeter of Enver Hoxha’s former villa. Valbona, the florist, is a very polite and smiling lady, always ready to give a flower and a smile to passers-by who stop to greet her. Even her clothing tells of her love for flowers, jackets with floral designs, colored shirts like the roses she sells. Su fell "in love" with Valbona for all these characteristics, and day after day their relationship grew. Su filmed Valbona, Valbona offered flowers to Su, till the moment Su asked Valbona to feature for AT THE CORNER. The resulting video of an ordinary day of the florist is beamed on a gallery wall, creating a "diptych" with the florist herself present to sell her flowers. Reality is duplicated in time and space, creating a short circuit between a one-way media such as video, in which the audience can only look at Valbona selling her flowers, and the reality in which Valbona, dressed in the same clothes as in the video, sells her flowers to people in the gallery. It’s as if this repeating gesture in a continuous exchange with the video, transforms reality in the loop of itself.

Branislav Nikolić has focused his attention on the details he encountered during his stay. He continuously drew, pinned, glued and made visual notes on the notebooks built by himself. Items used to occupy public space, bus tickets, landscapes of the city, rainwater downspouts everything became part of the TIRANA DIARIES, until his other encounter, that with Enver Hoxha’s pyramid, the decrepit building resembling an empty tomb of a ghost in the center of the city. The pyramid, built as a memorial to Hoxha and later a center of trade fairs and cultural activities now closed and left to itself it’s perhaps the most particular architecture in Albania. It’s a "walkable" building, meaning that everybody feels the irresistible urge to climb its slopes to reach the top. Maybe inspired by its physical and tactile features, Nikolić decided to realize IF THE HAT FITS THE SUIT, a sculpture made with secondhand materials, wood, iron and other, flipping the building upside down, turning it into an "imploded" pyramid whose way is no longer ascending but descending. The viewer's gaze moves from the top of the sculpture and edges down to the bottom, where a red star is located that, perhaps a little melancholically, shows itself to the viewer from the bottom of a story which is now part of Albania's past. It stands as witness to the common roots of modern Albanian and Balkan’s history that divided and united, but that cannot be ignored to understand who we are today.

TICA AIRLAB this year is run in collaboration with MAPS - Museum of Art in Public Space and Stefano Romano was the curator/coordinator of the spring term.

TICA AIRLAB 2016 is made possible through the support of the Ministry of Culture of Albania. For the spring term the program is also collaborating with Mondriaan Fund, supporting the residency of the Dutch artist, Su Tomesen. 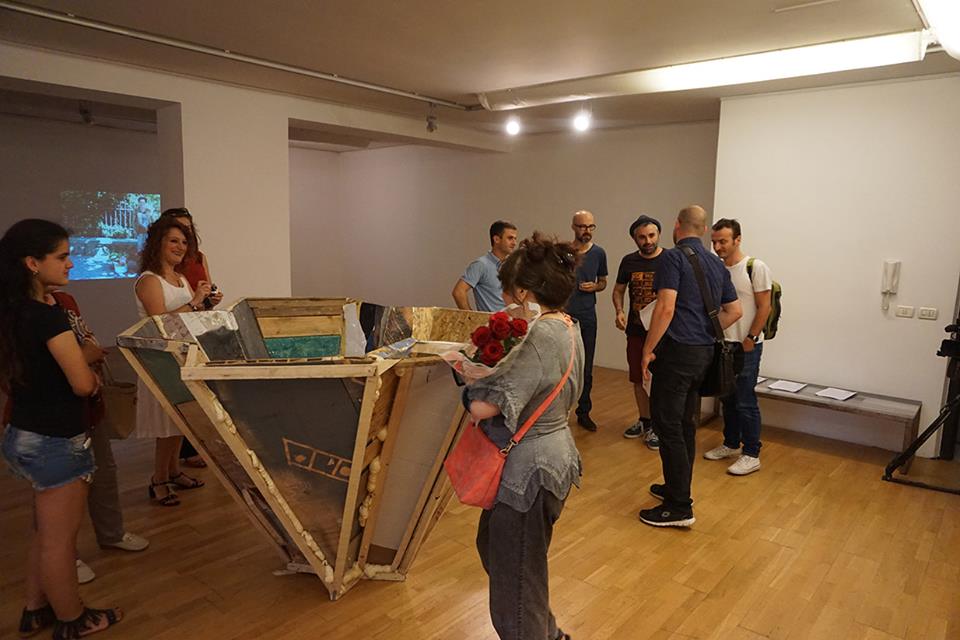 TICA started a collaboration with MAPS, Stefano Romano will be the curator/coordinator of the spring and autumn TICA AIRLAB residency programs.

The spring residency program will start on April 29 and the artists who will attend it will be: Silva Agostini (AL/DE) - Branislav NikoliĆ (RS) - Su Tomesen (NL)